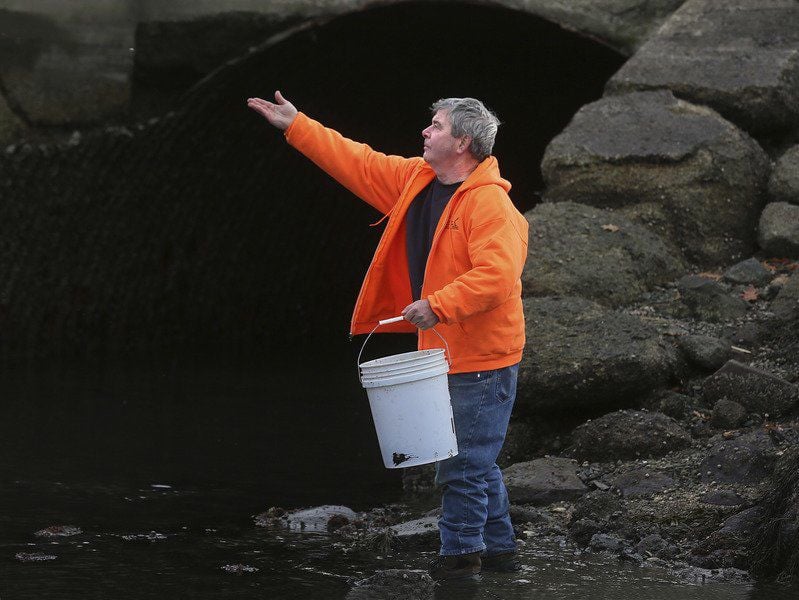 
The Massachusetts Oyster Project has successfully transferred about 60,000 juvenile oysters into estuaries in the waters off Essex, Gloucester and Ipswich to cap off its first season.
Now, it’s really up to the oysters.
“Obviously, we really want to keep an eye on them and make sure they do well,” said Jennifer Filliault of the Massachusetts Oyster Project. “It should take them a couple years to get to the standard size, which is about 3 inches.”
From July to November, the Massachusetts Oyster Project, in partnership with Maritime Gloucester, raised the oysters in a tank at the maritime education and museum on Harbor Loop. The tiny bivalves started off no bigger than a red-pepper flake and grew first to the size of a dime and then a nickel before being transferred into the wild.
“Maritime Gloucester was just a fantastic partner to work with,” Filliault said. “We had great survivability of the oysters and they became a real resource for educating students and visitors about oysters.”
She estimates more than 5,000 students and 20,000 Maritime Gloucester visitors visited the oyster tank and learned of the social and environmental benefits of oysters. The project provided aquaculture training to Maritime Gloucester interns, volunteers and staff.
The project also formed an alliance with Salem State University researchers to monitor the growth and survival of the oysters in the Essex location.
The oysters — standard Eastern oysters which are individually capable of filtering up to 50 gallons of water per day — now are the property of the individual communities, which will administer when and if they become part of the allocation annually reserved for public gathering.
But, according to Filliault, the oysters will have had the chance to go through several spawning seasons before they reach harvesting size, thus helping organically expand the population in the waters in which they reside.
“We’d like to see them stay in the water, spawn and multiply,” she said.
Filliault said plans for 2018 include working again with Maritime Gloucester on growing another batch of oysters in Gloucester, as well as seeking out other locations and partners on the North Shore or elsewhere to expand the stock of oysters available for transfer.
Contact Sean Horgan at 978-675-2714, or shorgan@gloucestertimes.com. Follow him on Twitter at @SeanGDT.
Posted by AJ at 5:32 AM