Trevor Corson's fine book The Secret Life of  Lobsters intermingles the story of scientists uncovering knowledge of lobsters reproductive/migration habits with the evolution of a Maine island fishing village.  If you have an interest in the science of the sea, or learning more about the world's favorite crustacean then you should find this book an engaging read. 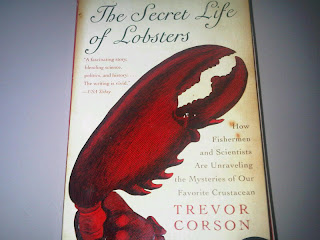 Perhaps one of the most interesting links with our beloved oysters is how juvenile oysters prefer to inhabit nooks and crannies in cobble. This could be a comparable environment to an oyster reef. it will be interesting to find out if oysters are reproducing in Boston Harbor or if juveniles can be found here. In May Boston Lobster Tours will be active again and perhaps some of the answers can be found on board, or through the Massachusetts Lobstermen's Association. 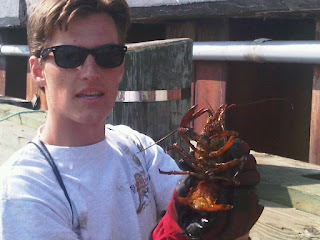 One of our student interns found this fellow among our oysters in the summer of 2011, so they definitely are here.

For the second time, MOP has teamed up with Keri and Liz of Mercato del Mare, a North End Fish Market, for oyster shucking lessons from 5:30 PM - 7:30 PM.  Come learn how to shuck an oyster.  Once you have the basics down, you can shuck & eat oysters throughout the event.   Beer and sushi will also be provided. $45 per person.  Limit 20 people.  Advanced registration can be done through the online store on the MOP website.

The 32nd gathering of the Milford Aquaculture Seminar will be held March 12 – 14, 2012 at the Water’s Edge Resort and Spa, Westbrook, CT. This year's meeting will feature 40 talks and 24 posters!  Please see the agenda page for more details.

One of our Board Members has attended in the past and speaks highly of this event. There area  a number of interesting presentations on the agenda.  One that is particularly interesting is Best Practices For Shellfish Restoration: Blueprint For Restoring Threatened Habitats While Protecting Public Health.  If you are attending, please let us know what you learn and if there is a way to get the presentations on-line.

These two opportunities to learn about shellfish and oysters recently came to our attention. Since we frequently have people approaching us seeking for interesting opportunities to get aquaculture or ocean science experience, we share them here.
Maine- TECHNIQUES IN SHELLFISH AQUACULTUREWe will be offering a one week intensive May term/summer course at the Darling Marine Center, Walpole, Maine on Techniques in Shellfish Aquaculture. Registration opens on February 24th. To find out more about this course please go to this web page http://www.dmc.maine.edu/coursesUM.html
This course is open to both UMaine students and anyone not engaged in formal study who desires to attend for general purposes.
It is a one-week residential course during which participants explore the theory and practice of marine bivalve aquaculture as practiced in the Northeastern United States. Bivalve taxonomy, anatomy, reproductive biology and genetics; algal culture; larval rearing techniques; pathology and site selection, water quality and human health issues are among the topics to be covered. Prerequisites: general knowledge of biology or relevant work experience, or graduate standing.
UMaine students can register directly through MaineStreet.
Non-UMaine students, please register through the Office of Continuing and Distance Education/ Summer University by calling 207-581-3143.


The Oyster Aquaculture Training Program (OAT) administered by the VIMS Aquaculture Genetics and Breeding Technology Center is seeking another round of applicants for the 2012 season.   Attached is the brochure announcing this opportunity to learn through an intensive, hands-on program, working alongside researchers throughout the 2012 oyster hatchery season - and getting paid while doing it.  This is not your typical VIMS summer job – it’s a unique opportunity not requiring any previous experience or education in biology.  This information is also available at http://www.vims.edu/research/units/centerspartners/abc/oat/index.php .

Applications are accepted online at W&M ( https://jobs.wm.edu)  and must include a cover letter stating interest in oyster aquaculture.  The cover letter is a key criterion for selection that must emphasize level of interest and relevance, not necessarily prior experience or education.  The Oyster Aquaculture Training Program limits the number of participants to 4 in order to provide a one-on-one learning environment.

New York Oyster Restoration Meeting
A Mass Oyster Project (MOP) representative was recently a guest at the meeting of New York's Oyster Restoration and Recovery Partnership hosted by the Baykeepers Organization. It was impressive and inspiring. Why?
First, there were over 40 people in the room working together to discuss issues around oyster restoration and to foster projects. They represented over a dozen organizations including the EPA the New York State's department of marine fisheries, shell fishermen, the Hudson River Foundation and on and on. They had been successful at bringing together the large coalition. It can be done and MOP will be working in this direction as well.
Second, we saw that many of the activities we were doing, they were as well. In addition to restoration they were working on shell recycling. they were a bit ahead of us in terms of oyster gardening and their restoration methods. New York also has an  upweller to raise oysters at a school on Governor's Island, which is a great educational tool. They also faced challenges with oysters getting washed away at some sites, but our biggest challenge- predation seemed to be of lesser concern for them. (This is a topic for further investigation.)
Third, while MOP is not as large, we have built a significant experience base and are not far behind. We incorporated our learnings in our most recent proposal to the Massachusetts Division of Marine Fisheries who provides our permit.This was submitted last week.
Wave of Events
As promised we are getting the ball rolling with Spring.  Here are some fun things that you can do in the next few weeks.
- March 10, 2012 - Oyster Shucking Lessons

For the second time, MOP has teamed up with Keri and Liz of Mercato del Mare, a North End Fish Market, for oyster shucking lessons from 5:30 PM - 7:30 PM.  Come learn how to shuck an oyster.  Once you have the basics down, you can shuck & eat oysters throughout the event.   Beer and sushi will also be provided. $45 per person.  Limit 20 people.  Advanced registration can be done through the online store on the MOP website.

Join us for a beer tasting at Harpoon Brewery.  MOP will be bringing plenty of oysters for $1.00 each.  We'll also have merchandise for sale and free drawings.  A $10 per person suggested donation to MOP is encourage.  Space is limited to 50.  You must pre-register for this event by emailing us at massoyster@gmail.com.  When you register, tell us how many oysters you and your friends might want to help us plan accordingly.
- March 15, 2012-   MOP presents to the Duck Boat Drivers

We will be updating them on the extensive history of oysters in Boston/Cambridge, their important role in the environment as over 100 other species will live in an oyster reef, and our progress to date. (This is not open to the public.)

-May 6, 2012-  B&G Oyster Invitational
If you are an oyster lover, this event held at the Tremont Street restaurant in Boston's South End is for you. MOP collected oyster shell for recycling last year and will be active again in 2012. The B&G team captained by Barbara Lynch does it right.
Posted by AJ at 1:21 PM No comments: