Senator Richard J. Ross of Wrentham is introducing draft legislation for the 2015 docket that is a landmark for oyster restoration in the Commonwealth. The draft bill contains language creating a tax credit for restaurants that recycle their oyster shell for oyster restoration.
﻿
﻿
This bill is a bellweather event as 2015 is the first year in which legislation has been filed in support of oyster restoration. We see three important benefits resulting from this groundbreaking effort. First, it puts oyster restoration on the table for discussion and we are just scratching at the surface of the potential for this valuable opportunity here in the Bay State. Second, it will allow us to engage our legislators constructively to work to build coalitions for further work. Finally, it also sends a message to the State's oyster regulatory authorities that the tide of public opinion is moving in favor of this important activity.
﻿
It has also come to our attention that Representative Sarah K. Peake of Provincetown has introduced legislation to streamlining the regulatory process to obtain authorization for placing cultch for oyster restoration.
Posted by AJ at 3:30 PM 1 comment:

Dormitory facilities are available at all three laboratories. We are seeking talented undergraduates or recent college graduates who have interest in any of the above-mentioned areas. Interviews will begin in February 2015 and continue until all positions are filled. Send resume and cover letter to: Gregory DeBrosse, Haskin Shellfish Research Lab, 6959 Miller Avenue, Port Norris, NJ  08349 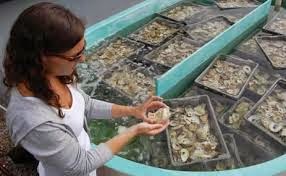 Hourly technician positions for undergraduates and recent college graduates are available at our laboratory. The Culture Technician positions will be located at our NJ Aquaculture Innovation Center site in North Cape May, NJ and begin February, March, April, and May. The remaining positions are located at Cape Shore Laboratory sited on the shore of Delaware Bay, approximately ten miles from Cape May, NJ.  The rate of pay for the Spring Technician position will be $11.50/hr ($460/wk).  This position will begin ~late February/early March 2015 and continue through approximately mid-December 2015.  The rate of pay for all summer positions will be $11.00/hr ($440/wk).  Dormitory accommodations are available at both facilities, for a fee set by the University.  The summer positions begin in mid-May to early June and continue until approximately mid-August. We also encourage students associated with internship programs to apply.  Descriptions of the general duties of each of the positions are given below.  Additional information can be viewed at our website; hsrl.rutgers.edu.   Anyone interested is encouraged to apply as soon as possible.  Send a resume and cover letter (including which positions you would prefer, if any) to:

SPRING TECHNICIAN - During the spring and fall, the responsibilities of this position will be varied and will include duties in the hatchery, field, and laboratory as needed.  During the summer research period, along with the laboratory Field Manager, is responsible for the care and maintenance of over 300 bushels of experimental oysters confined to bags on our tidal flats.  These oysters are progeny groups generated by our long-standing and continuing program in oyster genetics and breeding.  Much of the work week is spent on the tidal flats in front of the laboratory.  Duties include tray and bag maintenance, collection of biological data on progeny groups, and maintenance of our 75,000 gallon land-based nursery and holding systems.

CULTURE TECHNICIAN – These positions will be located at the New Jersey Aquaculture Innovation Center located in North Cape May, NJ. Duties associated with these positions include microalgal culture, assisting in spawning of bivalve molluscs, rearing of larvae and post-set juveniles, maintenance of hatchery larval and downweller tanks and nursery upweller raceway tanks and equipment.

FIELD TECHNICIAN - Assist the laboratory Field Manager in the care and maintenance of shellfish brood stock located in our quarantine, nursery, and field grow out systems.  Position responsibilities require working outside in all weather conditions, ATV operation, and some lifting.

HATCHERY TECHNICIAN - Duties associated with these positions include assisting in spawning of bivalve molluscs, rearing of larvae and post-set juveniles, daily record keeping, maintenance of hatchery and nursery grow-out system tanks and equipment, and micro-algal culture. Attention to detail is critical in these positions.

This article originally appeared on NJ.com you can see it here.

ASBURY PARK —New Jersey is experimenting with a relatively new method of oyster propagation to jump-start an industry that came to a crashing halt generations ago because of extensive pollution and overharvesting.

The American Littoral Society is getting ready to start its second season of a new method of oyster seeding, called tankless spatting, in an attempt to restore oyster beds on a large scale with less effort and less money compared to current methods, officials said Saturday.

The first attempt at tankless spatting came last year when the littoral society, operating on a permit from the state Department of Environmental Protection, installed what looks like an underwater 10-foot circular curtain off Good Luck Point in Barnegat Bay at the mouth of the Toms River, said Alek Modjeski. Oyster seeds then are let loose in the water within the curtain to find and settle into the shells laid there years earlier.

“We’re doing research in order to determine how we can scale up what works in the bay,” said littoral society executive director Tim Dillingham.

Believed to be the first time it’s been tried in New Jersey, tankless spatting was borrowed from the Chesapeake Bay and is designed to be cheaper and less labor intensive than planting seeds in shells in a tank and then transferring those shells to the bay, Modjeski said.

After three days of the tankless spatting process, the seeds began to take hold in the shells, he said. There’s still more tweaking that has to be done this year, he said. Because of the heavy boat traffic near Good Luck Point, only six of the 21 bags of shells set out for the experiment were recovered, he said. The rest were probably dragged through the bay by boats whose operators didn’t pay attention to the bright buoys marking the location of the curtain, he said.

“If we’re successful at this site, we can do it almost anywhere,” Modjeski said.
The littoral society starts laying new layers of shell at the reef in Barnegat Bay on Monday, he said.

Besides reviving a nearly dead industry, oyster bed restoration is seen as a natural way of cleaning waterways. A single oyster can filter 50 gallons of water a day.

In its heyday, the oyster industry in New York and New Jersey drew from 220,000 acres of oyster beds in the Hudson River Estuary and about 12,800 acres in the Barnegat Bay. Now there are only a couple of acres of experimental research projects conducted by the littoral society, the NY/NJ Baykeeper and Rutgers University, in addition to a few natural oyster beds on the Delaware Bay.

At the peak of commercial harvesting between 1870 and 1930, Barnegat Bay alone supplied 20 percent of all the oysters in New Jersey, Modjeski said.

The littoral society outlined its efforts on Saturday during a “Lunch and Learn” session at Langosta Lounge in Asbury Park where residents were briefed on the topic while they sampled oysters cultivated at an oyster farm in Tuckerton.

In 1927, the Raritan Bay was the last bay in the New York-New Jersey area closed to oyster harvesting, bringing an end to a culture and economy built on that industry.
Pollution – raw untreated sewage being dumped into the waterways – got so bad that by the 1960s, oysters couldn’t even live in the area waters, said Sandra Meola, Baykeeper communications and outreach associate. After the 1972 federal Clean Water Act started to improve conditions, Baykeeper has been working since 1999 to try to restore oysters in the region.

Baykeeper was dealt a serious blow in 2010 when New Jersey DEP officials, citing concern about illegal poaching bringing contaminated oysters to market for human consumption, banned restoration projects in contaminated areas of the Raritan Bay. That meant the Baykeeper’s half-acre oyster reef in Keyport Harbor had to be abandoned, Meola said. Baykeeper criticized DEP as abandoning its duties to patrol the waters to prevent poaching. A year later, Baykeeper found a new home for a quarter-acre reef in the bay off Naval Weapons Station Earle where there would be little chance for the public to find the reef, she said.

Meola said Baykeeper and other environmental groups are now pushing for passage of a bill, sponsored by state Sen. Gerald Cardinale (R-Bergen), that would restore Keyport Harbor as an approved research location.

“There are very few natural resources today. The water is too polluted and overharvested,” Meola said. “We’re just hoping they lift that ban.”

Mike Palmisano of Keyport said he attended discussion because he wanted to be in a better position to try to convince his legislators to pass laws to benefit the oyster industry.
“We want to understand the importance of the research so we can go back and speak intelligently to our legislators,” said Palmisano, who is a member of Keyport’s environmental commission.