With a solid crowd of attendees, great beer and over 500 oysters consumed, Oyster Night was a great way to support oyster restoration and usher in the Spring. People posed in the MOP sign and enjoyed the excitement as a Bachelorette teacher from Medford learned to shuck oysters. (With this skill in hand her groom is sure to be there at the altar on time- if not a bit early!) 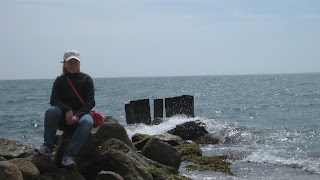 Vanessa Schmidt, a visitor to the States on a working internship sent us a photo of her on the rocks in Falmouth on scenic Cape Cod enjoying the beautiful weather. She is a supporter of oyster restoration and tasted her first oyster at a recent event at the Harpoon Brewery. (She had several!)
Posted by AJ at 10:54 AM No comments:

The Army Corps of Engineers has released an ambitious plan for restoring oysters to Chesapeake Bay. The Chesapeake Oyster Recovery: Native Oyster Restoration Master Plan targets 19 areas, 11 in Maryland and eight in Virginia, for restoration. Those waterways include the Eastern Bay, Tangier Sound and the Nanticoke, Choptank and Chester rivers in Maryland. The Pocomoke, Rappahannock and James rivers are among the areas in Virginia.

The goal of the program is "Throughout the Chesapeake Bay, restore an abundant, self-sustaining oyster population that performs important ecological functions such as providing reef community habitat, nutrient
cycling, spatial connectivity, and water filtration, among others, and contributes to an oyster fishery."

Additionally, the plan also calls for sanctuaries where harvesting won't be allowed covering 20 percent to 40 percent of historic habitat.

The report goes on to highlight 7 advantages of oysters.The ecosystem services provided by oysters are numerous (Grabowski and Peterson 2007), but largely difficult to quantify at this stage of restoration. These services include:
The study found costs could run as high as $7.85 billion, compared to the $5 million a year the effort is now getting from Congress according to sources quoted in the Huffington Post.

We are encouraged by this plan for several reasons. First, it shows that oysters are on the national agenda. Second it is calling for oyster sanctuaries like those we are seeking to establish here in Boston. Third, if Massachusetts is not ashamed by its inability to tap into Federal funds for Boston Harbor when the Chesapeake is getting $5 million for oysters per year, then the local environmental community should become mortified by its inactivity if/when significantly larger capital flows into Maryland and Virginia.
Posted by AJ at 11:17 AM No comments:

Study Nature or Painting on Nantucket This Summer

We recently learned that Professor AnaMarija Frankic will be leading a course on biomicry for UMass Boston on Nantucket this summer.

Biomimicry is an emerging discipline that utilizes biological models to evolve sustainable solutions to environmental and design challenges. Through biomimicry we learn from nature’s 3.8 billion years old wisdom and ask the question: What would nature do?

Biomimicry encourages inter-disciplinary discourse, bringing together design professionals and students (architecture, interior design and landscape architecture), as well those rooted in the sciences (biology, natural resources and the environment).

AnaMarija has been close to MOP since the early days and we have seen her consistent dedication to her students; working tirelessly to find them employment opportunities and educational grants.

There are other courses as well including one on wetlands and one on painting.


The Economic Impacts on Ecological Restoration in Massachusetts Report


Officials from the Department of Fish and Game’s (DFG) Division of Ecological Restoration (DER) recently issued a report detailing the economic impact of state-supported ecological restoration projects – including dam removals and culvert replacements.

The report shows restoration projects generate an average employment demand of 12.5 jobs and $1,750,000 in total economic output from each $1 million expended.

While these projects are primarily initiated to restore river and wetland functions, such as improving flood protection and habitat for fish and wildlife, they also have the benefit of creating or sustaining jobs and eliminating or replacing unsafe infrastructure.

Mass Oyster is pleased to see that the state is looking more favorably on these projects from an economic perspective.  Interestingly a significant number of them of them are based around wetland restoration. Let's hope they support the next step of restoring the biodiversity of those wetlands.
Posted by AJ at 11:28 AM 2 comments:

MOP will be holding its Second Annual Oyster Night at Harpoon Brewery on Wednesday April 18th from 5:30-7:30 pm. There is a suggested admission donation of $10 per sperson. Beers are free and oysters are $1 each. There will be our famous drawing for oyster prizes as well. You can register or pre-order oysters through this link at the Mass Oyster Store- MOP Store. There is free parking and you can get directions here.

We are not sold out yet, but we are well on our way. Come join us for fun, oysters and some tasty brew.

Global traveler and medical marketer extraordinaire Lisa F. who works for Billerica, MA based Belmont Instrument sent us this photo of her wearing her MOP hat at Leffis Key sanctuary in sunny Manatee County, Florida. Not only does it help protect her from skin cancer, but also it contains an important catch phrase "An oyster filters 30 gallons of water per day."

Lisa often wears her hat while kayaking in the preserve and visiting an oyster reef located nearby.

To order your MOP hat go to the Mass Oyster Store.

Creatures That Live in an Oyster Reef- Menhaden (pogys) Under Pressure

A recent report “Little Fish, Big Impact,”issued by the Lenfest Forage Fish Task Force  calls for reductions in the harvest of herring sardines and menhaden. The report is the output from a panel of thirteen preeminent marine and fisheries scientists from around the world convened at the Institute for Ocean Conservation Science at Stony Brook University.  The primary purpose of the Task Force was to provide practical, science-based advice for the management of species known as forage fish, because of their crucial role in marine ecosystems.

The report details how the harvest of these important feeder fish has grown they now account for 37 percent, by weight, of all fish harvested worldwide, up from about 8 percent half a century ago. The consumer market for forage fish is relatively small; most of the fish are ground and processed for use as animal feed and nutritional supplements and, increasingly, as feed for the aquaculture industry, which now produces about half of all the fish and shellfish that people eat.

Menhaden are more commonly known as pogys and are frequently sited swimming in and around marinas. They breed and hatch offshore. Then the young migrate into brackish coastal waters to mature. Early in the settlement of Massachusetts Native Americans used them for fertilizer around corn plants. And in Colonial times they were regularly eaten and held in high regard for their taste. Boston fishermen will frequently capture them and use them as bait to catch larger fish such as striped bass and bluefish.

For those who are sensitive to the pressure on this species, another way to help them (beyond reducing harvests) is to improve and increase habitats. And oyster reef makes a terrific habitat with lots of food and nooks and crannies  to provide shelter. We have found pogys in and among our oysters several times.

Perhaps it is time to look beyond what we take out of the pool and look as well at how we can increase the amount in the pool.
Posted by AJ at 7:36 AM No comments: