We are headed into a busy weekend and we could use one or two volunteers at two fun events.
The Boston Local Food Festival will take place this Saturday from 11:00 am until 5:00 PM at Boston's Fort Point Channel outside the Boston Children's Museum. We will have a table with an oyster touch tank information on the organization, petitions to push regulatory authorities to move into Fort Point Channel and a chance to get photographed as an oyster or lobster. (That holiday card is approaching quickly.) 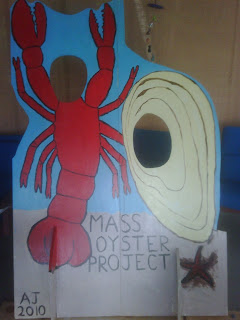 We also will have hats and our new 2010 limited edition t-shirts available for sale.
Then on Sunday October 3, we will be at the Friends of the Belle Isle Marsh Fall Festival from 1:00-3:00. The Marsh is beautiful and surprisingly close to Boston. They have hay rides, pumpkin decorating, other activities and a beautiful place to go for an invigorating walk. We will have the same exhibits here as at the Food Festival.
If you are looking to get outside for fun- come join us. Or volunteer with MOP for an hour or two.
Posted by AJ at 12:20 PM No comments:

While on vacation, I came across this research published in 2009 that was new to me and very interesting.  A five-year study of oyster-restoration techniques in Chesapeake Bay shows that taller reefs worked better in oyster restoration efforts.

A study conducted by Virginia Institute of Marine Science graduate students David Schulte, Russ Burke, and professor Rom Lipcius appeared in the July 30th issue of Science Express. Link to study.  Oysters showed greater abundance and growth on reefs built to stand 10-18 inches above the seafloor with reefs that rise only 3-5 inches.

The US Army Corps of Engineers constructed the reefs in 2004 by placing old oyster shells in 9 discrete sets of reefs covering more than 90 acres in the Great Wicomico River, a small Chesapeake Bay tributary, which is permanently closed to oyster harvesting.

In the area used in this study there is a natural oyster set meaning that local oysters reproduce and release young oyster spat. The spat then attach to suitable substrates that usually contain calcium. A very attractive substrate material is oyster shell, but other calcium containing material including concrete cinderblocks will work as well. On follow-up the taller reefs had four times as many oysters as the shorter reefs, and the oysters on the taller reefs were growing faster than those growing closer to the bottom.

The taller reefs have persisted and grown for nearly five years, indicating that the threshold for long term success may have been achieved. And they are approaching the form of a natural unharvested reef that once was prevalent throughout the Bay. Harvesting has reduced oyster abundance around the world to less than 1% of its original presence.

At the Massachusetts Oyster Project we have not yet laid down oyster shell to build up reef structure for oysters. We have not pursued this for two reasons. First, we have been focused on proving out that oysters can survive and grow in Boston Harbor estuaries. (There was considerable skepticism about this when we began this oyster restoration program.) And second, we have not yet devoted the time to figuring out the labyrinth of regulations for placing oyster shell on the bottom. However, we do have a volunteer exploring this and hope to commence a program like this in the next few years. We are hoping to have some reproduction this year and are eagerly watching for signs of it.
Our results also indicate that oysters that are a bit higher up and in the current seem to do better than those on the bottom. We also have learned the hard way about the dangers and difficulties of sedimentation, which greatly affected the class of 2008.

Let us hope that this and other successes will encourage the Army Corps of Engineers and other government bodies to consider funding similar programs in Massachusetts waters. Boston Harbor has improved dramatically over the past 20 years and we would welcome additional shoulders at the wheel working to restore this keystone species.
Posted by AJ at 1:33 PM No comments: