Here is an update on Wellesley College student and MOP intern Shira Bleicher's Summer in Maine.


This summer, I continued on my path of conservation biology, and went
up to Maine. I received a National Science Foundation Fellowship to
work at the Mount Desert Island Biological Lab in Bar Harbor, Maine. I
worked in Dr. Jane Disney's lab, on the conservation and restoration
of Zostera marina, or eelgrass, which has faced a hard path similar to
that of oysters in Boston Harbor. The eelgrass is restored to
Frenchmans Bay using a grid system, in which harvested plants are tied
to weighted grids and lowered into the intertidal zone.


This summer,
the lab as a whole experimented with new biodegradable grids, which
would take out the removal step and cause less damage to the plants
after the restoration. We created the design and made each grid by
hand - this was pretty tough for our 80 grid transplant, and we had a
lot of volunteers from the community to tie plants to grids on the day
of the transplant. 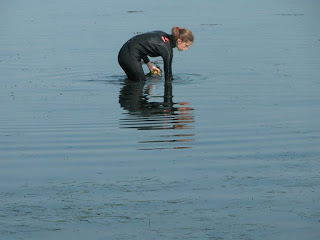 Harvesting 1600 plants was also a time consuming,
back breaking challenge! We'll likely have results about the new grids
next summer.


The lab also conducted water quality tests and red tide
monitoring, in order to ensure the safety of the community around the
bay. Each fellowship student working at the lab had to design and
conduct their own experiment relating to the overall goal of the lab,
so I spent most of my time on that. Elias Peirce, a freshman at
Bowdoin College, and I conducted an experiment that took place at 4AM
out on a lobstering boat! We collected GPS points at each trap, and
recorded everything that came up in each trap. We were able to overlay
this data over eelgrass location data that we had collected in kayaks,
in order to determine whether or not species diversity and abundance
was related to eelgrass. The results are detailed on our poster, but
we found that smaller lobsters are found closer to eelgrass,
indicating its use as a nursery. Kelp also seemed to pop up as an
interesting relation to species counts, and may be a new conservation
target.

We are delighted to see MOP alumni making progress in their careers. Below is photo of a Maine morning taken by Shira. It did not fit with the text but was too beautiful to leave out.

The following encouraging news was sent to us by NY/NJ Baykeeper, who has had a rough ride with regulatory auithorities who removed and destroyed oysters that were part of a restoration program.
NY/NJ Baykeeper placed 18 oyster nets into the water  at Naval Weapons Station Earle today, in order to conduct scientific research about the viability of oysters in that area of the Raritan Bay.
In July, 2010, the New Jersey Department of Environmental Protection banned research, restoration, and education projects using oysters in "contaminated" waters; waters classified as "Restricted" or "Prohibited" for shellfish harvest.  The ban ground to a halt NY/NJ Baykeeper's scientific work to test the viability of restoring oysters in the Raritan Bay.  Not content to abandon hope for restoring water quality in the Raritan Bay, NY/NJ Baykeeper approached the Navy about placing oyster nets at Naval Weapons Station Earle, which is under 24/7 security, and therefore eliminates any poaching risk.
"We are grateful for Captain Harrison, and his staff at Naval Weapons Station Earle for being a gracious hosts to our team of scientists as they prepare to revive this vital research project," continued Mans.   "We hope that NJDEP will overturn its ban on oyster research so that we can expand this scientific work beyond Earle."
While awaiting approval from NJ DEP to place the oysters at Earle, NY/NJ Baykeeper and its volunteers have been growing baby oysters in tanks in space provided by Moby's restaurant in Highlands.  The babies were recently counted and measured, and they were placed in tiered oyster nets placed sub-tidally below the pier at Earle.  In spring the nets will be removed and the oysters inspected.  The results will answer a simple question:  can oysters survive a winter in the water at Naval Weapons Station Earle?  The answer will guide future oyster research and restoration opportunities.
Back here in New England, the oysters placed by the Mass Oyster Project are within direct line of site of a State Police Marine facility, so hopefully this would allay concerns of poaching within our regulatory authority.  Also Boston Harbor is closed to shell fishing with the exception of steamer clams in certain areas under strict regulation, so this further reduces the likelihood of pilferage.

Anupendra Sharma sent us this photo of him with his MOP hat in front of the Opera House in Norway. "The Opera House is one of the most famous buildings in Scandinavia. It is in a beautiful location on the water's edge where fresh (cool) breezes often blow."