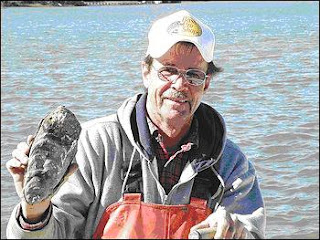 Mike Deal shows off the unusually large oyster that he pulled out of the . (Pamela A. D'angelo)
From an article in the Washington Post
A large oyster nine inch oyster that Mike Deal, above, pulled out of the dwarfed the three- to four-inchers all around it. Deal said it was the largest oyster he had seen in his 30 years as a waterman.
Oysters are struggling to survive in the Chesapeake Bay's polluted waters and tributaries such as the , where oyster diseases and a history of over-harvesting have depleted wild stocks to 1 percent of what they were a century ago. As a result, larger and older oysters are rare.
Jim Wesson, who heads the Conservation and Replenishment Department of the Virginia Marine Resources Commission, said it was a feat for a wild oyster to survive and grow this large in "this day and time." Russell Burke, a marine conservation biologist who studies oysters, estimated this mollusk's age at seven to nine years. "I believe that this Rappahannock oyster may be the largest natural oyster pulled from the since before MSX [a parasitic disease] ravaged the bay in the early 1960s," he said. "Hopefully this is the beginning of a wonderful new trend."
The giant oyster was on display at the Urbanna Oyster Festival this month and is getting a new home on a sanctuary reef in . (The author of this posting is relieved that it was not eaten!)
The importance of this oyster is that it has some type of resistance to MSX a disease that invades the digestive system and effectively starves the oyster much like a tapeworm. MSX usually hits oysters hard in their third and fourth years of life. So a real old one like this offers hope for the future. We do not know if the oysters in harbor will be plagued by this pathogen. Only time will tell.
MOP to Present at International Conference on Shellfish Restoration

As part of our ongoing effort to raise awareness of oysters as a natural approach to mitigating pollution from surface run-off and other sources we are presenting at  the International conference on Shellfish Restoration in Charleston  South Carolina on November 18th. We hope to have our slides up on slideshare.net shortly thereafter. We are attracting national interest.
View In A Nutshell
There were once enormous oyster reefs on the that were so large that they obstructed shipping. While those oyster days and the days of shipbuilders have long since passed. The surprising beauty of the beleaguered waterway remains. Check out this time-lapse video  as a reminder.
Posted by AJ at 5:46 AM