Expanding and growing the program- Look to New York

As someone who hates to see our beloved Red Sox lose to the New York Yankees, it gives me some solace to know that we can learn from the oyster initiatives underway there.

At MOP we had long been aware of efforts to introduce oysters in Brooklyn. But, after recently learning more of a broad plan of distributing oysters for people to grow on docks and the installation of an upweller we thought that we should highlight these other initiatives as a motivator for us to do more. Here is a link to the Baykeepers Oyster Restoration Program. NY/NJ Baykeeper Oyster Restoration

An upweller is a dock-based underwater oyster incubator. It houses thousands of tiny to small oysters in protective structures until they are big enough to go out into the harbor on their own. For a look at one in place  at the New York Harbor School on Governor's Island take a look at the short video below featuring Pete Malinowski. New York Upweller

With an upweller, we could raise many more oysters, pilot more sites and engage more people.

Here are some photos of an upweller: First the insides. 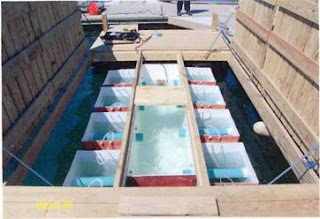 Then with the flaps open from a distance. 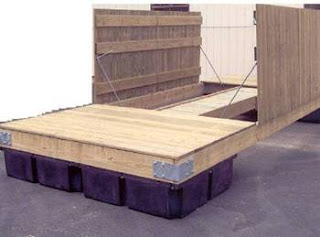 Here is one in place looking and acting like a dock.

We are connecting with the New York group to compare notes.  Come on Red Sox Nation! We aren't going to let them lead us on the baseball diamond and in the water too!  Are we?
Posted by AJ at 1:45 PM