Our dive team has settled on the morning of Sunday October 25 for the next oyster placement in the Charles River Estuary. We will need volunteers to help out measuring oysters, some light moving of equipment, and of course kids (6-12 years old) to help spread the oysters. Please email us if you want to be a part of this event.

Our caged oysters in the Charles are continuing to grow at an amazing pace. Since placing them on August 12, they have grown from the size of dimes to Kennedy half dollars. It is amazaing to pull up the cage and see all the other creatures that have set up home. You can see photos here.
Oyster Cages in September 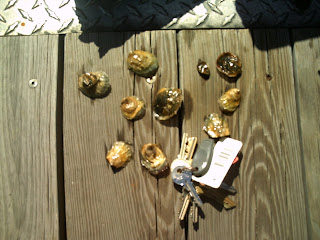 The smaller oyster that is just right of center at the top is a bit larger than the original size.

There was no sign of young oyster spat settlement on the bags of shell we set down. The shell bags had many barnacles and mussells, but no sign of oysters. This is not a surprise as we were not fully expecting reproduction until year two. Also, the silt run-off and deposition was extensive and buried a fair percentage of them. The photo below shows one of the quoahog shells we placed. 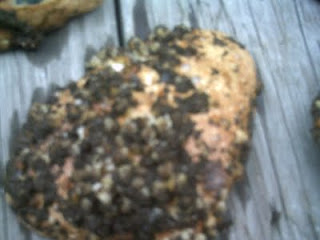 Here is a link to the full slide show of the bags of shell.

Finallly, the Army Corps of Engineers has been providing some informal advise to MOP. They had an underwater camera that needed testing and they have imaged portions of the Charles Estuary for us.