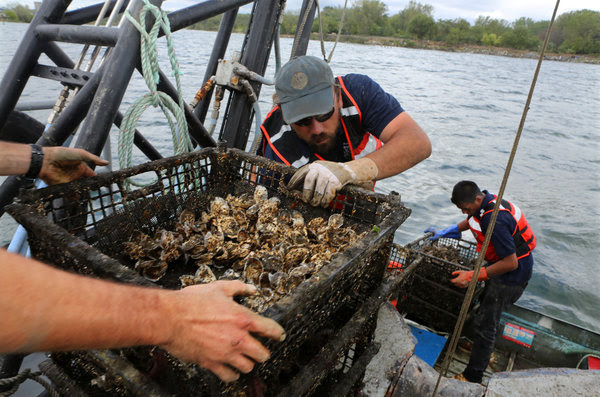 Nicole Bengiveno/The New York Times
Pete Malinowski, with the New York Harbor School, and a student, Luis Negron, in background, putting oysters into a reef in the Bronx River.

The oyster did.
Oysters clung tenaciously to tires here and there, a tiny remnant of the vast oyster reefs that once thrived in New York City’s waterways and nourished natives and settlers alike. Now after decades of cleanup efforts in the river, the oyster has emerged as a tangible measure of how much more needs to be done to return the river closer to its natural state.
A one-acre oyster reef has been created in the river just off the shore of Soundview Park in the South Bronx — one of the largest oyster restoration projects in the city. On Saturday, students from the Urban Assembly New York Harbor School relocated about 100,000 farm-raised baby oysters, known as spat-on-shell, to the reef, which was made this summer by piling 100 tons of empty shells on the river’s muddy bottom.
These Bronx oysters are not destined for the dinner plate or coveted as a source of pearls, but instead are prized for their ability to filter pollutants and anchor a marine ecosystem with their craggy reefs.
“They’re ecological engineers,” said Dennis Suszkowski, science director of the Hudson River Foundation in Lower Manhattan, which is overseeing the oyster reef in the Bronx River. “Oysters will grow on top of one another and create a three-dimensional habitat with all sorts of nook and crannies for fish to feed and use as shelter. It’s the kind of habitat that was once here that is no longer here.”
The project builds upon more than a decade of painstaking oyster research and experimentation in the New York region, which once had mile upon mile of oyster beds that supplied oyster houses, saloons and even street carts across the city before they largely disappeared, victims of overharvesting and pollution, according to scientists.
NY/NJ Baykeeper, a nonprofit organization, has recruited volunteers to tend so-called oyster gardens — small clusters of oysters in metal cages — in their own communities. In 2013, the program expanded to 45 sites in the region, up from 30 last year.
But such restoration efforts still have a long way to go. The Urban Assembly New York Harbor School, a public high school on Governors Island that started an oyster farm in 2008, has raised just over two million of the billion baby oysters that it intends to provide for restoration projects, including the one in the Bronx River.
“It’s a huge challenge,” said Pete Malinowski, a teacher who oversees the school’s oyster program. “We’re still scratching the surface in trying to figure out what it means and how we should do it. It’s very early on.”
Though there were some wild oysters in the Bronx River, they did not survive in any significant number until a small pilot reef was built there in 2006 by the city parks department and community and environmental groups. The reef was cobbled together from clam shells, which are more readily available than oyster shells. Some of the shells washed away. More were piled on. Soon wild oysters floating by attached themselves to the shells. Spat-on-shell were added to the budding population.
“We saw that the oysters survived, and that we had successfully created a beneficial habitat, so we decided we should promote this site and do more,” said Marit Larson, director of wetlands restoration for the parks department.
In 2010, the Hudson River Foundation and NY/NJ Baykeeper led a coalition of more than 30 governmental agencies and scientific organizations to test experimental oyster reefs in six locations around the city, including the Bronx River, Jamaica Bay and near Great Kills Harbor in Staten Island.
The Bronx oysters thrived, and the coalition secured $165,000 in grants to build a larger reef there in June.
Throughout the summer, researchers and environmentalists pulled on their waders and trudged into the river to check on the new reef. On one trip, the soft, shifting river bottom sucked at their waders like quicksand.
“You have to keep walking because there’s no real bottom, at least that we can find,” said Damian Griffin, education director of the Bronx River Alliance. “As soon as your ankle goes down, you have to really work to get it out.”
The oyster has been embraced by community groups in the Bronx, where it serves as a positive counterpoint to the much-publicized pollution of the river. Rocking the Boat, a nonprofit youth development organization, has introduced the oyster to high school students as a way to teach them science and history. It has even provided samples to taste — from Whole Foods, not from the river.
Chrissy Word, the group’s director of public programs, said most of the students had never stepped foot in the river before helping to monitor and track the growth of oysters there.
“The vast majority of them think the Bronx River is a terribly dangerous place because it used to be,” she said, citing the pollution and debris that were once its hallmark. “You still can’t eat the fish, but the positive thing is we can use it in many ways we couldn’t before.”
For some, the river is fit again not only for oysters, but also for humans.
Justin Fornal, the host of “The Culinary Adventures of Baron Ambrosia” on the Cooking Channel, swam by the new oyster reef in July to call attention to the river as a natural resource for the borough. He said he was warned by friends that he might “come out with extra body parts.”
Mr. Fornal, 35, recalled looking down and seeing abandoned objects like dolls, tires, radios and air-conditioners buried in the silt, seemingly frozen in time. But he also swam through clear, deep stretches that reminded him of the ocean.
“There are those who would disagree with me that it’s clean enough to swim in,” he said. “But I felt great after the swim. I didn’t get as much as a cold.”