This article on the New York Times website attracted our attention.


Here’s an excerpt from a post over at Pace University’s EarthDesk blog focused on the Billion Oyster Project, an exciting effort to connect middle school classrooms around New York City with the history and future of New York Harbor through the restoration of a legendary bivalve.
The piece is by my Pace University colleague John Cronin and includes a conversation with Lauren Birney of the Pace School of Education, the lead investigator in the project, which has received a $5-million National Science Foundation grant:

A century ago, the oyster was New York’s pearl. Oystering was as integral to New York Harbor’s identity as the Statue of Liberty. The waters of the city and New Jersey boasted more than 260,000 acres of oyster beds spread throughout the harbor, its bays and estuaries, the lower Hudson and East rivers. New Yorkers ate more oyster meat than beef. The original New York “foot-longs” were Gowanus oysters, gathered from Gowanus Bay and Creek in Brooklyn and exported to Europe as a delicacy.

In present day New York, oysters are better associated with the Oyster Bar in the cellar of New York’s Grand Central Terminal, where oysters from Apalachicola Bay in Florida and Chincoteague Bay in Maryland are now the delicacy. Generations of pollution drove out New York oystering, and today the name “Gowanus” is identified less with the bay and more with the canal, a toxic federal Superfund site (hopefully on its way to a major cleanup).

But the Billion Oyster Project, the brainchild of the New York Harbor School, aims to change all that by enlisting hundreds of thousands of city school children to restore a billion oysters to city waters. “In short, students are driving the restoration of New York Harbor,” said Birney….

John Cronin: By the late 1800s, New York Harbor was already being lamented. Harper’s Weekly was fond of running cartoons about how fouled it was and a federal law, the Rivers and Harbors Act of 1899, was enacted to control the abuse. But here we are, still talking about the harbor’s poor condition. Pairing a middle school education with its restoration is ambitious by any standard. How do the two fit together in the Billion Oyster Project?

Lauren Birney: City students benefit enormously from an increased awareness about their ecological place. Water defines New York City; it’s surrounded by it. Our young students will lead the community in the Billion Oyster Project, and get to understand first-hand what it means to make a real difference. They will earn a unique sense of ownership in their local and water community because they are the ones who are driving the restoration.

JC: In addition to the students’ work constructing reefs, growing and planting oysters, and operating monitoring equipment, the $5 million National Science Foundation grant is designed to translate that hands-on experience into a curriculum for the city school system. How?

LB: The harbor is like a living laboratory for education in STEM. We want to give students the opportunity to learn outside the school building. Our consortium of partners is creating opportunities for citizen science, real-time data collection, operation of monitoring technologies, and more. After-school mentoring provides extra enrichment for those students especially interested in STEM. Maybe a student gets excited about oysters or the condition of the harbor and decides to be a biologist, or pursue an interest in maritime law. An interest in our monitoring technologies could open a door to the study of engineering. These experiences are such a rarity for our students they may otherwise not have the opportunity to discover their passion.

JC: I know from experience it is not always easy to integrate such innovative education into the standard public school curriculum. Is that a challenge?

LB: Yes. But we have a great partner in the New York City school system, and a strong emphasis on teacher training. Over the next 18 months we expect to work directly with 40 teachers; each has 30 – 35 students. And those teachers are sharing with other teachers, such as English teachers. This is such a rich area of pedagogy it can infiltrate through all subject areas.

Read the rest of Cronin’s post here. If you’re in the New York City region, you can attend a conversation about the many partnerships behind the oyster restoration and education initiative at Pace’s Manhattan campus on Tuesday evening.

For more on the Harbor School program that was the seed of this broader initiative, click back to my post on oyster reefs as a surge protector, published a couple of months after Hurricane Sandy struck the city.
Posted by AJ at 3:55 AM No comments: 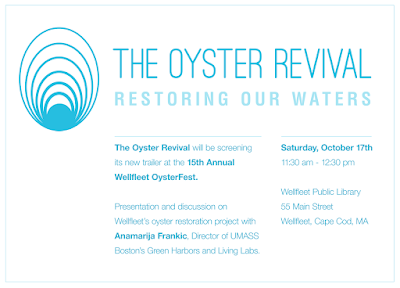 We hope you will stop by to visit us at the Wellfleet Oysterfest this weekend. Our booth will be located next to the oyster shell recycling roll-off.

In addition to slurping down some delicious oysters, there are other excellent foods including classic chowder and fried lobster tail.

In addition to feeding your stomach, you can feed your mind by attending a preview of The Oyster Revival at the Wellfleet Public Library on Saturday at 11:30 am.

Mass Oyster has been watching this project since it's infancy and we are excited to see it coming to fruition.
Posted by AJ at 3:21 PM 13 comments: