Yesterday a group of us checked on the oysters and we had some pleasant surprises.  First, we placed some bagged oyster shell to see if we could catch some spat- if we get some reproduction. The young oysters prefer to settle on oyster shell after floating intheir first two weeks of life. ( Keep your fingers crossed.)

.
Then we pulled up some caged oysters that were placed two years ago.  We were expecting significant mortality. Surprisingly in some cages 80% of the oysters were alive. And those cages were in the most silt. (Go figure.)Here's a photo of one. Note the darkened shell from the mud. We did not measure them for growth- but it was not overwhelming.

There were two other good things. One is that our high school student volunteers started picking up glass and other debris, cleaning the area. Bring kids to the water and they clean it up.

The other was when we began compiling the data. The high school students became engaged as we calculated mortality percentages and began brightening as they applied the math they were learning in school. Theycame up with the observations. The aquarium folks call this "Citizen Science." It was fun seeing the kids working hard and engaged.

I recently went to visit Moon Islands and Long Islands in Boston Harbor as part of a volunteer program through a group called TUGG (Technology Underwriting Greater Good) or tech gives back as part of a service day. Since these Islands are generally closed to the public, this was an interesting opportunity.
Among the interesting things to see was the old Curley Auditorium on Long Island.

The Curley Auditorium is condemned due to asbestos, which is too bad. It sits high above the water with a porch that would be wonderful for intermissions during Summer Theater. In this auditorium Dropkick Murphys’ recorded their video of “The State of Massachusetts" a song about the effects of drugs on individuals and their families.  It was released as the first single from the album, The Meanest of Times. and was especially popular with the Boston Red Sox and the Boston Bruins sports teams
The old sewage storage facility on
was integral to ’s first sewage system. Effluent from 14 towns was collected there and released into an outgoing tide. Four huge cut-granite storage tanks with a 50-million gallon capacity were built by the Cape Ann Granite Company to handle the sewage. These vats were formed by digging out the northern section of the hill and cementing and bricking the sides of the excavation. This reservoir was divided into four compartments, each with inlets and four outlets. The tanks were 900 by 150 feet (46 m) and 17 feet (5.2 m) deep. The bottoms were seven feet thick and were grooved to ease the removal of sludge. At one end was a gatehouse. The tank outlets were connected with a power pump and a turbine that was used to open the gates of the outflow pipe. The 12-foot (3.7 m) diameter outflow conduit extended 600 feet (180 m) into the harbor from the northern end of . The Sewage Plant was completed in 1884 at a cost of $6-million.
Here is a link to a photographic tour of this amazing place. 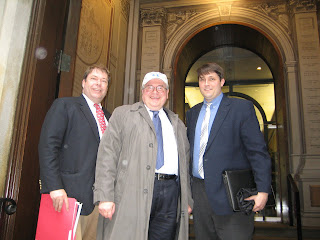 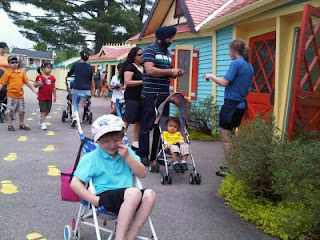 If you would like to order a Mass Oyster hat for $15 send an email to massoyster@gmail.com and we will arrange to get one out to you
Since we have had challenges obtaining regulatory approval to bring oysters to other areas of the Harbor we have forwarded a petition to the Governor with over 200 signatures requesting that he explore the matter. We also are seeking to build a broader coalition of support for oyster restoration to help move the bureaucracy forward. Thus we met with Speaker DeLeo. There will be a meeting on June 15th sponsored by The Boston Harbor Association to discuss the future of the Harbor and where we take it from here. If you are interested in getting involved by attending, please visit  this registration site.
$1 Oysters at Rialto in Cambridge
Finally, while checking in on our blog activity we learned that a Cities and Squares had sent us a fair amount of traffic as they had referenced work our interns had done in tracking down the historic presence of oysters in .  While visiting their interesting real estate based site, we learned that Rialto offers $1 oysters  every Monday night at 5:30. We had to share the good news!
Posted by AJ at 7:22 AM 1 comment: