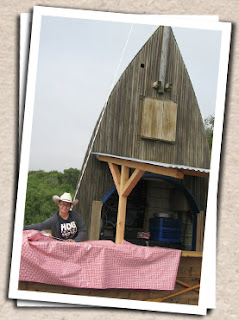 We are frequently asked how are the oysters doing. We will be checking on the oysters on the bottom later this week. But we do have some data to share on oysters that have been hanging int he water column. They have been their for two growing seasons and in that time  we have seen them effectively double in size to an average of 80.3 mm.

Total mortality has been 16.2% since we started late in 2009 and in the past year it was just under 5.7%. Interestingly, the mortality seems to be of oysters at the low end of the size distribution. Maybe they are small because they are sick. Maybe they cannot compete for food as well and die because they are small. Who knows? This year the average size of the dead oysters was 67 millimeters while the average size was 80.3 millimeters.

This year, we shifted the oysters from milk crates to grow out trays to provide them with a better environment. Below is a photo of one of the milk crates. As you can see it is coated with mussels. Some have said that the mussel is having trouble in Boston Harbor, but it does not appear to be the situation here.

Since we are drawing contributions from a broader and broader catchment area and since this appears to be an exciting initiative providing valuable data. The MOP Board voted to award a grant of  $2000 to the town of Wellfleet for their oyster restoration work.

While Wellfleet has a healthy and well-known oyster industry, the natural reef is largely gone. This restoration effort at the mouth of Duck Creek consists of placing shell and allowing for the naturally existing spat (young oysters) to settle on it and grow. The MOP Board is particularly excited about this effort as the goal is to create reef and to measure the improvement in water quality. A number of other Cape towns are interested in using oysters for nitrogen removal including Mashpee and Falmouth.


This project is a collaboration among the Town of Wellfleet, the Green Boston Harbor Project out of UMass Boston and Environmental Partners Group.

In response to 5 cases of oyster related illness on the Cape last year, the state has begun placing regulations for growers to get oysters in a cold environment sooner in response to FDA regulations.

Vibrio parahaemolyticus bacteria occur naturally in seawater. Vibrio like sticking to objects in the water such as silt, sediment, rotting shells, or the gill membranes of oysters. When oysters are in the water, in cool New England, temperatures are generally too cold for the bacteria to multiply quickly. The oysters metabolize and purge them out of their systems over time. But when water temperatures rise above 80 degrees or oysters bake in the sun on tidal flats or in the back of a truck, the bacteria can double by the hour. If the levels get high enough, vibrio can cause diarrhea, vomiting, fever and chills, sometimes requiring hospitalization. People with compromised immune systems are particularly vulnerable.

While these regulations apply to growers and distributors, they also should be kept in mind by those who buy oysters to take home and consume at home. Like other foods such as meat and chicken, proper storage and handling is essential.
Posted by AJ at 7:00 PM No comments:

At the Oyster Project's last Board Meeting we were pleased to have Curt Felix of Wellfleet's Waste Water Committee present on the oyster restoration activity in Wellfleet Harbor. While Wellfleet has a healthy and well-known oyster industry, the natural reef is largely gone. This restoration effort at the mouth of Duck Creek consists of placing shell and allowing for the naturally existing spat (young oysters) to settle on it and grow. The MOP Board is particularly excited about this effort as its goal is to create reef and to measure the improvement in water quality. A number of other Cape towns are interested in using oysters for nitrogen removal including Mashpee and Falmouth.


Curt explained that the project needed additional funding to buy more sea clam shell to use as cultch. Our $2000 grant will allow the purchase of approximately 6 dump truck loads.MOP will also be sharing some of the oyster shell it  has collected for recycling in 2011.  If you were at the B&G oyster event on Sunday, you met some of our indefatigable volunteers collecting four barrels of shell. That shell will be aged for a year before use at space graciously loaned to us by an East Boston Businessman.

This project is a collaboration among the Town of Wellfleet, the Green Boston Harbor Project out of UMass Boston and Environmental Partners Group.

We recently learned of an interesting oyster partnership in Rhode Island -The Walrus and the Carpenter Oysters offer oyster lovers in Providence,  New York and possibly Boston to buy oysters directly from farm in Community Supported Aquaculture.(CSA). Jules and Patch raise less than a million oysters per year in the pristine waters of Ninigret Pond, one of the largest coastal ponds in Charlestown, RI..

Jules and Sean recycled leftover bamboo from the Big Bamboo exhibit at the Metropolitan Museum of Art  to use on their farm.

To reach out to this innovative duo email Walrus/Carpenter

The team at Boston Lobster Tours is offering a $45 discount to friends of the Oyster Project on their $180 Lobster Tour. The trip accommodates up to 6 people for a 75 minute cruise with a Coast Guard certified Captain. In addition to getting out on our beautiful harbor, the Captain will haul up traps and harvest lobsters to be sold for consumption. Seeing the traps pulled up can be a fun eyeopener as they usually contain a multitude of creatures including crabs, starfish, and other fish as well as the lobsters. Children really do enjoy this. 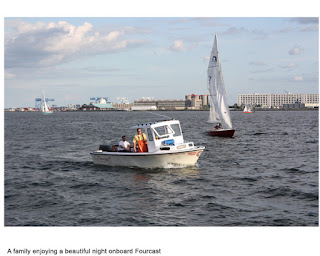 Freshly caught lobsters are said to be better tasting than those that have been kept for some time. When I go on this trip in June, I intend to find out first hand! BTW- The largest population of live lobsters in the US is in Tennessee near the Fed-Ex Hub. (Who wants to eat a lobster from Tennessee?)

To get your discount type in the word "Oyster" when booking the tour on line.

MOP just learned of the hand-forged Georgia Oyster Knife is  made from treated, mild steel with a decorative twist that is inspired by Savannah's historic ironwork. The manufacturer claims that the one-piece, steel design with additional bottle-opening bar is the strongest oyster knife ever made. Having a bottle opener built in sure is convenient and it this were from a more Northern clime we would say it is a fine example of Yankee ingenuity. 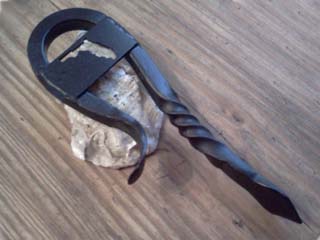 Here is a fun video showing how they forge the knife.

Mass Oyster to Host Screening of Shellshocked: Saving oysters to Save Ourselves in the North End on Wednesday July 18 at 6:30

SHELLSHOCKED: Saving Oysters to Save Ourselves follows efforts to prevent the extinction of wild oyster reefs, which keep our oceans healthy by filtering water and engineering ecosystems. Today, because of overfishing and pollution, wild oyster reefs have been declared 'the most severely impacted marine habitat on Earth' and no longer play a role in their ecosystems. Now scientists, government officials, artists and environmentalists are fighting to bring oysters back.

While the film is based in NY, the lessons and issues are directly applicable to Massachusetts harbors and estuaries, many of which once held significant oyster populations, perhaps most notably the State’s most urban harbor, Boston.

The film will be shown at the North End Public Library at 25 Parmenter Street. Immediately following the showing there also will be a discussion with Director Emily Driscoll, Anamarija Frankic of the Green Boston Harbor Project and others active in the field.

The New York Academy of Sciences hosted a panel discussion led by award-winning journalist Andrew Revkin, with some of the key players in the New York oyster restoration movement. There also was a special presentation by aquaculture students from the New York Harbor School on their oyster restoration work. New York City has long been renowned as the capital of finance, fashion, advertising and media. But New York like Boston/Massachusetts once hosted a large oyster industry.

The oyster was a daily reminder to New Yorkers that they lived on a bustling, productive estuary. But oysters were subsequently wiped out by pollution, dredging, disease, and over-consumption in the early 20th century. In Boston, the oysters in the Charles River Basin came to an end in the late 1800's. There was oyster harvesting continuing in the Mystic well into the 20th century.

More recently, however, thanks to a movement of environmentalists, educators, historians, and locavores, New Yorkers are beginning to reconnect to their water-bound past, and the symbol of this reconnection is the eastern oyster.

In 2003, the New York Harbor School opened as the city's first public high school with a curriculum focused exclusively on the local marine environment. With dozens of partners, the Harbor School has made the restoration of the local oyster population to self-sustaining levels the centerpiece of its unique marine science and technology curriculum.