We try to support the industry and new farmers such as Big Rock oyster company who will be supplying oysters for our September 15th craft beer and oyster event at Plymouth's Mayflower Brewery. Register here.
But back to Provincetown's shellfish farm. You can visit...
Given the right tide conditions and time of day, They can take groups of two to thirty-two out to the flats for an in-depth look. Participants learn about planting the seed clams, racking the oysters, floating the oysters in tidal waters, spreading the oysters on the sand so they get the desired “cup”, and finally, digging the clams and checking for the size of the shellfish for legal limits for harvest.
You can even dig your own clams and forage for oysters just like at a pick-your-own apple orchard. Frequently they’ll find seals lying on the oyster grow cages and dolphin pods have traveled past while they work.
Check the Cape Native Secrets website for tour availability.
Cape Native Secrets
131 Commercial Street, Provincetown
508-237-9538 / www.capenativesecrets.com
Here is the Boston Globe article. 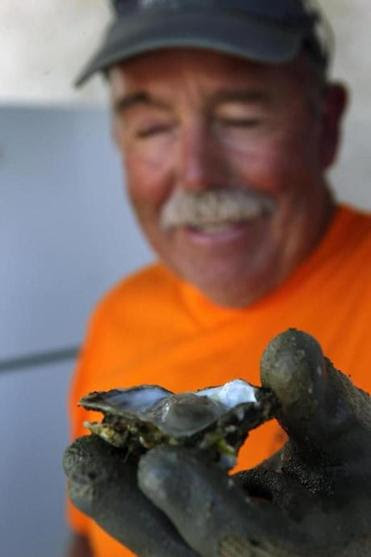 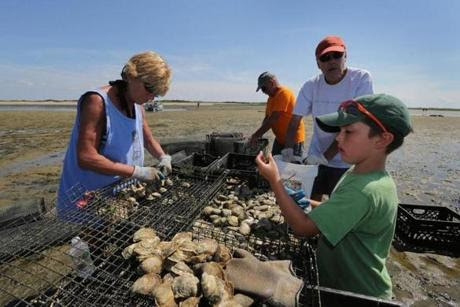 Barry Chin/Globe Staff
Lory Stewart, John Santos, John Goff, and Myles Santos work the beds.
PROVINCETOWN — On a cloudless July afternoon at low tide, John Santos ferries four passengers — one of whom is his wife and business partner, Lory Stewart — across Provincetown Harbor to the 2-acre aquaculture grant (Grant No. 5) where the couple began farming clams and oysters four years ago. Wood End lighthouse beckons straight ahead. Long Point Beach, at the very tip of Cape Cod, sits just to the left. The only visible companions are two seals who pop up to greet the arriving skiff as it approaches the flat.
While Wellfleet, two towns over, is practically synonymous with oysters, Grant No. 5 is the only working grant in the harbor and the couple are the first in this town to raise oysters, which they have branded Long Pointers. Santos, 66, and Stewart, 63, took over the grant from Santos’s godfather, Larry Meads, who had farmed clams on the site with his wife, Nancy, for many years. A fourth-generation Provincetown resident, Santos owns Flyer’s Boatyard and Rentals, a business his father founded and his son, Noah, now runs. Though still involved with Flyer’s, Santos says he saw the grant as an opportunity to do something in retirement that would keep him busy without taking up all his time. Stewart is director of instructional technology for a regional school district on the mid-Cape.
Once the skiff anchors, Santos heads straight for what he calls his “office,” a pontoon boat anchored on the flats, from which he can see the clam beds, oyster cages, and full sweep of Provincetown in the distance. Stewart leads the passengers onto the flats for a lesson in shellfish farming. This is nothing new for her. In addition to growing and harvesting the mollusks, Santos and Stewart offer eco-tours and pick-your-own clams and oysters. In its first season, the activity is very popular, particularly on sunny days.
Standing on the flats, Stewart explains that clams are planted in 10-by-50-foot runs, with about 100 seeds per square foot. She and Santos currently have about 250,000 clams in various stages of development. At planting time every summer, they rake the plots, lay down nets with rebar, then sprinkle seeds, which they get from Aquaculture Research Corporation in Dennis. It takes three years for clams to grow to market size.
The nets hold the clams in place and protect them from predators – primarily boon snails and crabs. Periodically, Stewart and Santos have to bring out long-handled squeegees to wipe away seaweed, which can suffocate the clams. After two years they remove the nets, and periodically rake the clams. “It shakes them up. It gives them a chance to wiggle around and grow,” Stewart explains. At that point, the clams are developed enough that they burrow back down into the sand to continue growing.
Using a bull rake, Stewart scrapes the sand and picks up a clam. She pulls an oyster and clam gauge out of her bag and places the mollusk inside to measure it. She and her husband are raising littlenecks (1-inch quahogs). “You want them right there [1-inch],” she says. “Those are the most desirable for steaming, for linguine. Non-keepers today should be ready in two to three weeks.” When she and her husband harvest, also in summer, they rake up about 2,000 clams at a time.
“Oysters are a lot of work,” says Stewart, walking across the flat toward a group of floating oyster cages. “You have to handle them a lot. Most weekends in May, I stand at a table culling oysters for eight hours each day.” These bivalves take four years to get to market size. Stewart and Santos have 500,000 oysters in different stages of development and their goal is to harvest 20,000 annually. 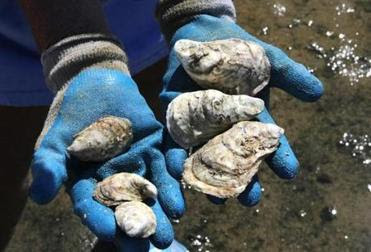 Barry Chin/Globe Staff
Oysters culled from Provincetown aquaculture beds.
The couple’s growing process has “morphed,” according to Stewart. They started with bags of seeds on metal frames. Now the majority grow in floating cages that move with the tidal water. The couple believes this helps develop the desirable deep cup that means a meaty oyster. They are also growing some oysters on racks. And Santos saves empty oyster and clam shells, then spreads them on one area of the flats. The oyster shells give off spat, or natural oyster seed. The oyster larvae attach to the empty clam shells and to polyethlyene plastic “Chinese hats,” named for their shape, which the farmers set out stacked on cylinders. This is a way to create a natural oyster population.
Stewart’s and Santos’s clams and oysters are served in restaurants in Provincetown and Truro, in addition to being collected by tourists the couple bring to the flats.
Chris King, owner of Cape Tip Seafood, which distributes them, says of the Outer Cape’s newest entry, “It’s coming along great.” He describes the oysters’ taste as similar to those of the neighboring Wellfleet.
Shucking an oyster on the boat heading back to town, Santos maintains his Long Pointers taste so good they need no lemon or cocktail sauce. It’s hard to argue with that assessment after slurping one from its shell.