On a long flight I read through the $3 billion plan for restoring oysters to the Chesapeake Bay. In addition to learning a bit more about oysters, there is a bit of history as well. The document credits President John F. Kennedy with another example of his leadership ending a long-standing conflict- The Oyster Wars.

In the late 1800’s oysters were immensely popular. As the number of oysters in the wild began to drop, oystermen began putting out young oysters of their own to grow and seeking to establish the legislation to protect their oysters. When people started taking ownership of the oysters, they began resenting others who took them, calling those parties “poachers.” Some of the more aggressive oystermen took the law into their own hands and enforced it with the point of a gun. Through the years a number of people were killed. Many say that the Oyster Wars officially began in 1865 when Maryland began requiring permits for taking oysters from the State’s waters. Maryland followed up on the law three years later by establishing the Maryland Oyster Navy to prevent poaching. Virginia had its own travails. When that state made oyster dredging illegal a group of 'oyster pirates' banded together to violate the ban. At one time the State’s Governor conducted raids that arrested 46 men and seized 7 boats.

It should be noted that violence was not limited to this region as the tightening supply affected the entire East Coast. Interestingly, a whole new section of law was developed to address the need for outlining the ownership of oysters placed by growers and how the harvest of a section of ocean was regulated and tracked..

Young President Kennedy stepped up and put an end to the festering sore that existed between Maryland and Virginia as to whose oystermen had the right to harvest in the Potomac estuary. The last Potomac River casualties were in the late 1950’s. It took action by the President in 1962 signing the “Potomac Fisheries Bill” to induce the states to form the Potomac Rivers Commission to jointly oversee the estuary; bringing the hostilities to an end.  In comparison, the Cuban Missile Crisis lasted had only run a few days before he solved the problem.

Mass Oyster has begun working with a local hotel to take their oysters for recycling.This program will be rampinig up this Fall. 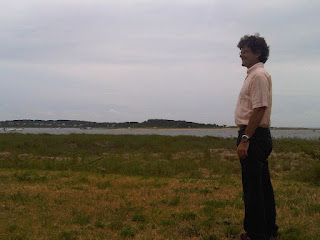 On Monday we delivered a load of aged recycled oyster shell to Wellfleet for use in the restoration program.Curt Felix walked us through the progress of shell placement and the science behind adding shell. It gives young oyster spat a place to settle and grow;providing essential habitat. Additionally the shell contains calcium carbonate, which reduces ocean acidity. Interestingly for the first time in several years Menhaiden have been seen in Wellfleet Harbor-perhaps this is a sign that the increased oyster reef structure is supporting more feedstock, or that the water chemistry has improved, or maybe it is just coincidence.

We received this link to an article on oyster reef restoration in New Hampshire on the Squamscott River. This is the second program that I am aware of. Does it seem odd that New Hampshire with little coastline is very active in oyster restoration and Massachusetts with a coastline that is several times larger has only three?