Warm Water Temperatures May Make For An Unusual Year

Seafood news noted that "New England has seen almost no snow this year, and temperatures have been very warm.  In the gulf of Maine, fishermen are reporting water temperatures as much as six degrees above normal.  This is going to play havoc with spring migrations.  Already the first red tide outbreak has been reported in Massachusetts a month early.  Also, on the docks in Gloucester, fishermen say they just don't know where the cod have gone to."
Chesapeake Bay Oyster Restoration Showing Progress
There is good news coming out of the Chesapeake Bay where restoration programs have been ongoing for some time.Virginia harvested 236,200 bushels of oysters last year. That is up from 79,600 bushels of oysters in 2005 and the most since 1989. Maryland hauled in 121,20 bushels, which was up from had only 26,400 bushels in 2005 and 0 last year.

More than half of Virginia's increase came from private aquaculture. Officials in both states said the fall stock surveys that assess the population also were promising last year.
Virginia's oyster population has been in a slow upswing recently because of better management of the fishery, But the overall population baywide still represents less than 1 percent of its historic numbers. For the full story with graphics visit this article from the Washington Post. Ongoing success there could help build momentum for restoration programs elsewhere.
MOP Hat In Paris
The ubiquitous MOP hat was recently sighted in Paris outside the Notre Dame Cathedral. 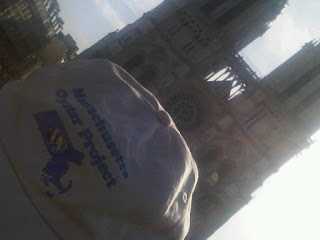