This article by Jason Nevil originally appeared in the State-Journal Register. It illustrates how people enjoy being on the coast and engaging in environmental efforts like oyster restoration.

If her schedule allows, she wouldn't mind another alternative spring break next year, she said. "If I can, I definitely will," Bolin said. 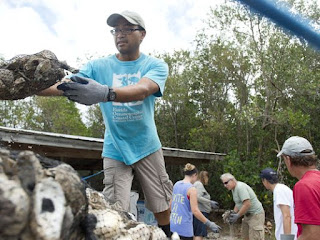 Hailey Hawkins spent as much time around bleach as she did on a beach the past week while in Florida. But the University of Illinois Springfield junior has no complaints.
"It was definitely a very different spring break," Hawkins said Sunday. "But I had a lot of fun."
Hawkins was among 25 UIS students who traveled to Florida last week as part of the school's alternative spring break program.
The students helped with outdoor eco-restoration projects along the Florida panhandle Gulf Coast.
Past trips include building homes for Habitat for Humanity following Hurricane Katrina, cleaning up damage from Hurricane Ike in Texas and working with the homeless at soup kitchens in Washington, D.C., and New York City.
This year, the students assisted with shoreline restoration, native plant propagation, sea grass restoration, wildlife habitat improvement, dune restoration, storm water treatment, public land restoration and invasive species removal.
Hawkins said her favorite part of this year's trip was helping with an oyster-restoration project.
"It was cool because it was something that we couldn't possibly do in Illinois," she said.
But much of the work wasn't glamorous. Hawkins spent two days scrubbing the under side of a roof with bleach at the E.O. Wilson Biophilia Center in Freeport.
Other students, she said, spent one day on their hands and knees cleaning waste and other debris from a goose pond at a zoo.
"Your clothes were gross by the end of the day," she said.
Mark Dochterman, director of the UIS Volunteer & Civic Engagement Center, said each student paid $150 and had to raise funds for the rest to go on the trip. Once in Florida, the group stayed at the Community Collaborations International campgrounds near DeFuniak Springs. The university picks places that offer a different experience than what students could get in Springfield, Dochterman said. "I think students bring back a different sense of purpose when they go and give freely to a place they have never been before," he said. UIS junior Regina Bolin also traveled to Florida last week. Bolin said her favorite part was being exposed to the variety of eco-restoration projects underway in Florida. The work this year was hard at times, but Bolin said it was enjoyable knowing that she and her classmates helped make a difference.
Posted by AJ at 12:28 PM