This story first appeared in the Panama City Times Herald.  You can see it here. Hopefully soon Massachusetts will wise up and decide to tap into some of these federal dollars to create jobs and improve our environment. 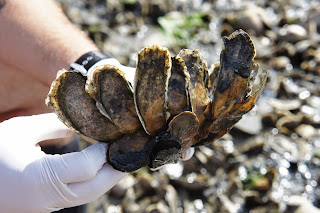 The oyster bed restoration will improve water quality and help restore seagrass, which will benefit a variety of plant and animal species in the bay, said Jim Muller, Bay County's RESTORE Act coordinator. "Seagrass and oysters serve as a nursery for a lot of species," Muller said. The NFWF said the restoration of one and a quarter miles of oyster habitats in West Bay will improve the water quality by reducing sediments, which will improve fisheries and reduce turbidity and wave action.

The project is expected to expand over 200 acres of seagrass beds. Grey snapper, spotted sea trout, mullet, grouper, red drum, flounder, shrimp, blue crab and scallops are among the species NFWF expects to benefit from the project.

Muller said the habitat was not directly affected by the 2010 Deepwater Horizon oil spill, but that's not required of projects that receive the grants. The Gulf Environmental Benefit Fund was established in 2013 with money paid by BP and Transocean to settle criminal charges stemming from the spill.

The project spending announced Monday is the second batch of a total $356 million from the fund that will be spent on restoration projects in Florida over five years. Florida officials lauded the announcement Monday.
“This $34.3 million in funding is great news for families in the Panhandle,” Gov. Rick Scott said in a news release.  “Florida’s natural treasures must be protected so that future generations will be able to experience all that our great state has to offer.”
The project will also benefit commercial and recreational fishermen as the species in the habitat thrive, Muller said.
“The Gulf Coast was badly damaged in 2010, but this money will lead to significant progress in restoring the area’s ecosystem,” Sen. Bill Nelson said in a release. “Protecting and restoring Florida’s natural resources is vital not only to our state’s economy, but to the state’s character.”
Another project announced Monday will pay $3 million to expand efforts to collect data on fisheries stock in the Gulf of Mexico. According to the NFWF, "The largest single impediment to effective management of Gulf of Mexico reef fisheries such as red snapper is the lack of sound data related to both catch effort and stock assessment."
Local commercial and recreational fishermen have complained about the science used to support a shortened red snapper season.
Posted by AJ at 5:00 PM