This is an excerpt from a story about oyster restoration published in the San Francisco Chronicle. In many ways it is like the work being done in Wellfleet, in which shell is being placed giving a framework for young oysters spat to settle on. That program is also generating considerable success.  Here is a link to the original story.
It also is interesting that at the end they talk about the long lost ecosystem in the Bay.  We have forgotten the ecosystem of Boston Harbor and what it can be. There once were sturgeon and even a salmon run in the Charles.  When Mass Oyster began in our first meetings we were told we were dead wrong when we talked about the massive oyster reefs that once were here.  The cleaner Harbor we have today is better than 20 years ago. But, we can take it a lot further towards original state without beach postings if we put the effort into it.
Two million native oysters have settled on man-made reefs in San Francisco Bay over the past year, marking the first major success in an effort to bring back a species ravaged by human excess..
The reefs, made of mesh bags filled with discarded shells from Drakes Bay Oyster Co., are part of the most comprehensive experiment ever attempted to bring back the nearly extinct Olympia oyster and restore its long-lost reef habitat.
"We're seeing a lot of oysters," said Chela Zabin, a wetsuit-clad UC Davis biologist, as she headed into the bay mud to return 60 Olympias that her team of scientists had collected the previous day and studied in the lab overnight. "We're now seeing a second generation of oysters settling on the first, which is what you want to see."
The five-year, $2 million effort, led by the California Coastal Conservancy, is part of the San Francisco Bay Living Shorelines Project, which is testing a variety of oyster and eelgrass restoration projects and assessing their impacts on wildlife, wave action and shoreline erosion.
The 1-acre shell-mound reef in San Rafael near the Richmond-San Rafael Bridge - and another one south of the San Mateo Bridge in Hayward - are attempts by scientists, including researchers from UC Davis and San Francisco State University, to figure out whether a natural protective barrier can be combined with habitat restoration to protect the shoreline and minimize problems caused by sea-level rise.

Besides the huge increase in native oysters, Latta said, wave action has been reduced and more fish, invertebrates and birds have been seen hanging around the reefs.
It is the first major success in a 15-year effort by conservation groups, the aquaculture industry and state and federal agencies to bring back the native oysters, which were once an integral part of the American Indian diet and a staple during the Gold Rush. The Living Shorelines Project, which is borrowing techniques previously used on the East Coast and Gulf Coast, is the largest oyster restoration effort attempted on the West Coast.
Olympia oysters, known scientifically as Ostrea lurida, once blanketed subtidal regions from Southern California to southeastern Alaska. The shells were abundant in the many American Indian middens discovered around the bay, some dating back 4,000 years.

The tiny mollusks, about the size of a 50-cent piece, were a delicacy during the Gold Rush. The Hangtown Fry was created, according to one legend, by a condemned man who ordered the two most expensive items he knew of at the time - oysters and eggs - for his last meal.
In 1893, Olympia oyster beds covered a total of 8,033 acres in Newport Bay, Elkhorn Slough, San Francisco Bay and Humboldt Bay, according to a recent study published in the scientific journal Proceedings of the Royal Society B. Almost a half-million oysters per acre once crowded together along the bay floor, according to the report.
By 1911, the native oyster beds in the Bay Area were gone, scoured clean by ravenous San Franciscans. The oysters that people now eat along the West Coast, including those grown commercially in Drakes and Tomales bays, are Pacific oysters, natives of Japan that are incapable of reproducing naturally in this climate.

The large crop of native oysters on nearby reefs is a promising sign for several reasons, Latta said. For one, oysters clean the water by filter feeding. A single oyster can filter up to 30 gallons of water a day, removing nitrogen and other pollutants.
More Fish
The other reason is that the oyster beds, or reefs, provide habitat for myriad fish, crabs and other creatures.There has already been a marked increase in juvenile Dungeness crab, bay shrimp and rock crab in the test area, she said. More birds, including black oyster catchers, great egrets and great blue herons, have also been seen, indicating an increase in the number of fish at the site.
The oysters will not be available for human consumption or fishing, researchers said, adding that they would not be safe to eat because of bay pollution.
Researchers documented a 30 percent reduction in wave energy at the site compared with a control area. That, she said, is a clear indication that the reefs can be effective barriers and might someday be useful in helping protect shoreline communities during storms.

Not all smooth sailing

Obstacles still remain, however. Recovery of Olympias has thus far been hampered by silty bay mud left over from the Gold Rush, pollution and a voracious alien whelk snail known as the Atlantic oyster drill. The gluttonous snail, introduced to the area in shipments of Atlantic oysters, drills into the shells of oysters and sucks out the insides. 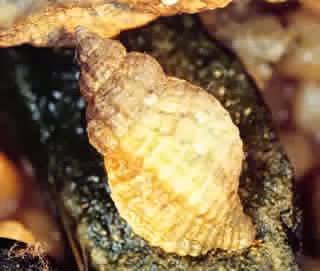 Latta said the biological reefs that researchers are building will help them figure out the best way to restore San Francisco's long-lost bay ecosystem, which sustained humans for thousands of years - then was wiped out in one century.
"That is our hope," she said. "It's a very innovative time. We're developing new data that may affect policy in the future."
Learn more at www.sfbaylivingshorelines.org.
Posted by AJ at 3:30 AM