There has been considerable discussion in the news about vibrio and oysters as the FDA is asking oyster producers to cool oysters more rapidly after harvest. This newly implemented regulation is putting strains on small Massachusetts oyster growers as it requires ice and cooling infrastructure.

For Northern oyster growers Vibrio has not been a problem historically as the bacteria is less common in cold waters. Nonetheless in the FDA's quest to ensure that our food is safe they are seeking to harmonize the rules on a national basis.


Vibrio is a naturally occurring bacteria that is more common in warm waters that are brackish and non-moving. Here is the descriptor from Wikipedia.

Vibrio vulnificus is a species of Gram-negative, motile, curved, rod-shaped bacteria of the genus Vibrio. Present in marine environments such as estuaries, brackish ponds, or coastal areas, 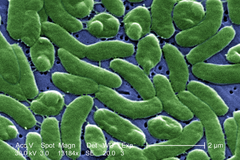 V. vulnificus is related to V. cholerae, the causative agent of cholera.[1Vibrio vulnificus causes an infection often incurred after eating seafood, especially raw or undercooked oysters. V. vulnificus does not alter the appearance, taste, or odor of oysters.[5] The bacteria can also enter the body through open wounds when swimming or wading in infected waters,[2] or via puncture wounds from the spines of fish such as tilapia.

Symptoms include vomiting, diarrhea, abdominal pain, and a blistering dermatitis that is sometimes mistaken for pemphigus or pemphigoid.

V. vulnificus is eighty times more likely to spread into the bloodstream in people with compromised immune systems, especially those with chronic liver disease. When this happens, severe symptoms including blistering skin lesions, septic shock, and even death can occur.[6][7] This severe infection may occur regardless of whether the infection began via contaminated food or via an open wound.[7]


While the bacteria does not have a large presence in the North it is not to be taken lightly. Its significant presence in Gulf coastal waters made for a sad story for a gentleman in Louisiana.


GRAND ISLE, La. (CBS Houston) — A Louisiana man died after contracting flesh-eating bacteria while fishing in the Gulf of Mexico.

The Town Talk reports the bacteria known as Vibria vulnificus – which is found in warm seawater – seawater – killed the 83-year-old man after his open wound got infected when water splashed on him during a fishing trip.

“It thrives in warm water,” Dr. Tina Stefanski of the Louisiana Department of Health and Hospitals told KATC-TV. “So, you can imagine in the summer months we see an increased number of this type of bacteria in warm salt water.”The department is warning swimmers and beach-goers to be careful in the warm water, especially ones with open wounds.
“We certainly do not mean to discourage people from enjoying water activities, but we want them to understand the potential risks involved,” Department Secretary Kathy Kliebert told The Town Talk. “DHH works with other state and local partners to monitor and test beach water to inform residents of the water quality and we hope residents will heed posted beach advisories when they see them.”

Three others swimming in the Louisiana Gulf coast were sickened from the bacteria.

Sheila Lord, who is on vacation, is not tempted to get into the water.“I’m a little bit nervous about it to be honest,” Lord told KATC. “You know you just don’t want to get sick. I’m on vacation. It would be horrible if I had to go back home with something.”


There is risk in anything and people who are immunocompromised are advised not to eat raw shellfish as Jeff Kennedy of Mass DMF aptly pointed out in our tour of the Plum Island Shellfish Depuration Plant.  But, that organization  is working hard to ensure that this delicious food is as safe as it possibly can be.